A Publication of The Association of Bone and Joint Surgeons ® 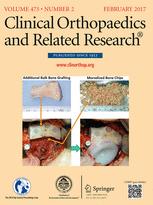 In a population of patients with acetabular dysplasia undergoing THA using a medial-reduced cemented socket and additional bulk bone with impacted morselized bone grafting, we evaluated (1) the radiographic appearance of bone graft; (2) the proportion of cups that developed loosening and subsequent revision; and (3) clinical results (outcome scores and complications).

Forty percent of 330 THAs for DDH performed at one center between 1999 and 2009 were defined as shallow dysplastic hips. The additional bulk bone grafting method was performed on 102 THAs with shallow acetabulum (31% for DDH) at one center between 1999 and 2009. We used this approach and technique for shallow acetabuli when a cup protruded from the lateral acetabular edge in preoperative templating. The other 132 dysplastic hips without bone grafting had THA performed at the same periods and served as a control. Acetabuli were defined as shallow when the depth was less than or equal to one-fifth of the pelvic height (cranial-caudal length on radiograph). The additional bulk bone grafting technique was as follows: the resected femoral head was sectioned at 1 to 2 cm thickness, and a suitable size of the bulk bone graft was placed on the lateral iliac cortex and fixed by poly--lactate absorbable screws. Autologous impaction morselized bone grafting, with or without hydroxyapatite granules, was performed along with the implantation of a medial-reduced cemented socket. We defined an “incorporated” graft as remodeling and trabeculation including rounding off of the protruding edge of a graft beyond the socket. Radiographic criteria used for determining loosening were migration or a continuous radiolucent zone between the prosthesis/bone cement and host bone. Clinical outcomes were assessed using the Japanese Orthopaedic Association (JOA) and the Merle d’Aubigne and Postel score; complications were tallied from chart review. The followup was 10 ± 3 years (range, 6–15 years).

One acetabular component (1%) with severe shallow and steep acetabuli showed definite radiographic evidence of loosening and was revised. Clinically, the mean JOA score for the hips treated with additional bulk bone grafting THA in this study improved from 39 ± 10 points preoperatively to 95 ± 5 points postoperatively (p < 0.05, paired t-test). The mean Merle d’Aubigne and Postel score for the hips improved from 7 ± 2 points to 17 ± 1 points (p < 0.05, paired t-test). Complications included a Trendelenburg sign in one hip, dislocation in one, and transient partial sciatic nerve palsy in one. Within 3 years 6 months postoperatively, 101 of 102 additional bulk bone grafting cases showed successful bone remodeling and bone graft reorientation without collapse on radiographs. Partial resorption of the additional bone graft on the lateral side was observed in two hips (2%) with socket abduction angles of < 35°.

Achieving stable acetabular fixation is often challenging in the dysplastic hip, especially shallow acetabulum, and a variety of techniques have been described. Early results of combining bulk graft with impaction of morselized graft are promising. Although each surgical technique was well established, further investigation for clinical results of a combination of these techniques might be necessary to confirm longer term outcomes.